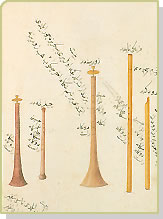 "Zurna" and "kaval" in various sizes.

Examination of the examples we have today shows clearly that from a musical standpoint, Turkish folk music contains a variety of different melodic features. Generally as one approaches the cities, the music shows more and more of the makam character of Turkish classical music. The rural and village music has a simpler melodic structure, with less influence from the makams. Both however contain a microtonal musical system; this is a fundamental characteristic of folk music.

As folk musical traditions have been passed from generation to generation over the centuries, regional differences have taken shape. These differences are known as "tavir" (regional style); this term expresses the difference is playing and singing among regional artists and asiks. However the term "tavir" is mostly used to describe differences in instrumental style. Differences in singing style are referred to as "agiz" (literally, "mouth"). These are the elements that determine the musical character of different regions, and the differences between. At some point, these styles also determine the melodic structures.

As Turkish folk music research has progressed, it has become apparent that folk music culture has created its own terminology. For example, to describe the melodic structure, the term "ayak" is used more than "makam." Examples of these are Kerem ayagi, Garip ayagi, Müstezat ayagi, Besiri ayagi etc. But it must be clarified that these do not carry the same meaning in every region.

Turkish folk tunes generally have a range of between 4 and 15 tones; but their range tends to increase along with proximity to urban centers, and decrease in more rural areas. There are of course exceptions to this rule.