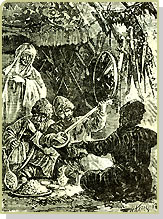 A musician playing the "kopuz" in a Turkmen tent.

The Turks are a numerous and widespread people, living today in Central Asia, the Middle East, the Balkans, the Caucasus and Europe. Though Turkic peoples living over this vast geographical area are different from each other, they come from the same roots. As the Turks have quickly integrated with the local peoples in the areas they live, their folk music has also become differentiated in the same way. The Turkish music that we will address in this article is that of the Turks living within the borders of today's Turkey and its immediate surroundings.

The Turks have lived in Anatolia and Thrace for nearly 2000 years. Along with the musical culture they brought with them from Asia, they have participated in cultural exchange with the local people in these regions. Consequently Turkish folk music in Anatolia displays a special structure comprised of several independent musical regions.

As opposed to the urban elite environment in which Turkish classical music emerged and developed, folk music shows the local characteristics of the rural population. As a different social product, it takes as its subjects all the natural and social events experienced by the people. The variety in its musical structure, instruments used, those who perform the music, and their social positions, are direct reflections of the people's lives.

Turkish folk music is fed by two main sources: türkü singers (those who create local music via anonymous songs) and âsiks. Türkü singers sing the songs that are performed in all sorts of celebrations, special rituals, certain religious gatherings and funerals throughout Anatolia. As they sing them over and over, they add different words, and create new songs with new names. The musical patterns as well as the lyrics they use are anonymous. Asiks on the other hand, are people who mostly create music with their own lyrics or the lyrics of other asiks. As they are outside the local music culture and sing and play in their own unique styles, the personal quality of their music is more obvious.