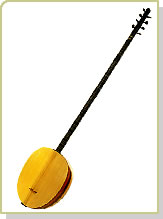 The tanbur is the most important plucked stringed instrument of Turkish classical music. The word, a form of the Arabic word "tunbur," is generally considered to derive from the Sumerian word "pantur," which was the name for a long-necked string instrument with a half-spherical body. The word later came to be used in Iran and Central Asia for a group of long-necked instruments with pear-shaped bodies, which more resembled today's baglama. Similar instruments still played by the Turkic peoples of Asia are called by names such as tanbura and dombra.

The tanbur's body is a half-sphere up to 35 centimeters in diameter, constructed of staves glued together. The tied frets were originally made of twisted gut, but today, with the exception of Necdet Yasar, almost all tanbur players use frets of nylon monofilament. The number of frets ranges from 45-55. Modern tanburs generally have seven strings, but tanburs of the18th and 19th centuries had eight strings. In recent years, some players have had eight-string tanburs constructed.