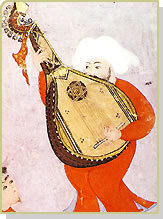 The sehrud is classified as a "short-necked lute." The word sehrud is of Persian origin, derived from the words sah-i rûd meaning "king of lutes/large lute." Though Fârâbî (-950) included an illustration of the sehrud in his Kitâbü'l Musiki, it is very difficult to determine particulars from this drawing. But it must be noted that this old sehrud is completely different from the large ud often encountered in Iranian miniatures of a few centuries later. Thus it is clear that this old name changed in meaning, being applied to a new and different instrument. One of the most-illustrated instruments in Iranian and Ottoman miniatures, the sehrud was generally drawn overly large. From this standpoint, the miniatures were obviously not realistic. In some miniatures, it is difficult to say whether the instrument depicted is an ud or a sehrud.

There is no obvious difference in design between Iranian and Ottoman sehruds. However, it can be determined from miniatures that Iran it was played with the neck horizontal, while the Ottomans played it with the neck elevated.