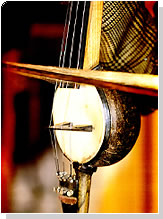 The kemânçe, or rebab, is classified in organology as a representative of the "spike fiddle" family of instruments. The word kemânçe is derived from a Persian word meaning "small bow," but is used mostly in the sense of "small bowed instrument." The old Iranian kemânçe, like many other elements of Iranian music, entered Islamic music from the very beginning. Its cut spherical body was generally constructed of coconut shell, and its face was either of sheatfish (Silurus glanis) or ox pericardium, and it included both two- and three-stringed variants.

The only bowed instrument used in Turkish music up until the 18th century, was very popular in religious-mystic music as well as in secular music. In the Mevlevî lodges, where it was used under the name "rebab," a sort of holiness was even attributed to the kemânçe. Upon the arrival and enthusiastic adoption of the viola d'amore from Europe in the second half of the 18th century, the kemânçe fell from favor in secular music and was abandoned, surviving only in the Mevlevî lodges. Its old name of kemân or kemânçe was even forgotten, and in time the name rebab used among the Mevlevîs came to be considered its only name in all periods and circles. In the 19th and 20th centuries, the Mevlevî musicians attempted to bring the rebab back into use, but without success.