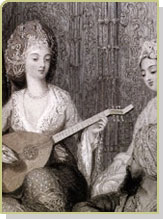 Women in the Ottoman Musical Tradition

An important feature of the 500 year-old Ottoman musical tradition is that it developed and survived to the present day with the contribution of women; there have been female composers, performers and even teachers of Turkish music. The musical activities of Ottoman women should be studied, not only in order to understand the Ottoman tradition but also the place of women in the music of modernizing Turkish society. Ottoman women worked more visibly in the cities and the urban musical tradition. The religious ayin/zikr music within the cities' religious circles aside, the secular urban music was, like most of the fine arts, oriented toward entertainment. Like the men involved in urban music, women also received more or less of a musical education. Urban women who loved music were not satisfied only to sing; they felt the need to play instruments as well.

Most of the oldest documentation of women performing music are from the 16th century. Illustrations have also survived from the same period. A document cited by Prof. Dr. İsmail Hakkı Uzunçarşılı, who examined the expense accounts and arms registries from the Topkapı Palace archives, shows that during the reign of Sultan Süleyman the Lawgiver, (Süleyman the Magnificent) the "Cemaat-i Mutriban" (musicians' ensemble) in the Palace included players of çeng, or Ottoman harp. During that period, the çeng was played by women. Sources show that this instrument was played in the palace not only in the 16th century but in the 15th as well. In the 17th century, the çeng was a typical "women's instrument." In 1639, a French merchant named Du Luir came to Istanbul with French ambassador Jean de la Haye and stayed seventeen months. After noting that Turks listened to music while eating, he tells us that at a meal to which he was invited, the women sat behind a curtain and listened to music performed first by men, and then only by women. When these women, called çengi, played the çeng, other women played a long necked instrument with a round body called a "kemançe" (rebab or ıklığ), and a percussion instrument (tambour de Biscaye), while the others both sang and danced with castanet-like çalpara. The çeng was to fall from favor in times to come; in the eighteenth century there were very few players left and by the 19th century it was abandoned entirely. One old record concerning the musical activities of palace women belongs to the 17th century. Ottaviaion Bon published a book in 1650 in which he provides information about Ottoman palace life. In this book, Bon notes that there were young concubines in the palace who played instruments, sang and danced, and who were free to leave and enter the palace on the condition that they informed the gatekeeper.

We learn that during the reign of Mehmet IV, there were musically-trained concubines in the harem as well. Among these concubines, who played ney, tanbur, kemançe, kanun, santur, çeng, çöğür, musikar, violin and daire, were some who had studied with masters in order to learn a wind instrument known as the nefir. The palace concubines took lessons from male musicians in the city, and would stay for weeks in the homes of their masters. In addition to well-known musicians of the city, there were also musicians working in the Palace who taught lessons to the harem concubines. Women musicians who were trained in the city were also sometimes taken into the palace.

Osman III, who assumed the throne following the death of his older brother Mahmud I, did not like music at all, and for this reason put an end to musical activities, not only in the harem but in the entire palace as well. However following his successors Mustafa III and Abdülhamid I, music was revived and entered the harem as well. The Venetian observer Toderini, who was in Istanbul during the period of 1781-1785, identifies the kanun as "an instrument played by women in the palace." Musical activity in the palace was developed even further during the reign of Selim III. We know that during the reign of Selim III's successor Mustafa IV, there was a pause in this activity. However during the reigns of Mahmud II, Abdülmecid and Abdülaziz, musical performance regained its former vitality in the harem as well as in the palace proper. In 1826, two years after the abolition of the Mehter band and the founding of the Mızıka-i Hümayun (military band), a western style band and orchestra was created at the palace. From Leyla Hanım (Saz), the daughter of palace doctor İsmail Paşa, who lived for many years in the palace, we learn that there was a sixty-member band and orchestra in the harem, all the members of which were women. Women's participation in music was such an old, well-established tradition that this tradition was even practiced in ceremonial music, though strictly speaking it should not have been. One could find bands consisting of women not only in the emperor's palace but also at the palaces and mansions of the princes. Musical activities were not only a form of entertainment for the palace or the homes of those in palace circles, but rather were an indispensable part of entertainment in the homes of all wealthy lovers of music. Following the Tanzimat, or reform period, these instruments were joined by piano and violin as well. Leyla Saz, who was well acquainted with everyday live in the palace and the great mansions in the second half of the 19th century, tells us that nearly all of the servants in the harem were "musicians and instrumentalists." She goes on to note that the upbringing of the servants of the Sultan's wife and the princesses included the study of the Koran, Ottoman history, poetry, and books and newspapers, as well as lessons musical instruments such as the piano, violin, and lavta.